2012年12月9日日曜日12:42
Hello this is Choco.
I'd like to talk about those around me when earthquake happened last night.
There was a big earthquake at 5:18 pm yesterday afternoon.
It was estimated 7.3 magnitude earthquake striking off Sanriku offshore.
At that time I was cooking dinner with my friends.
And we heard "5 pm music" from outside as usual/
About 10 mins later, we felt our house shaking.
We didn't move  but it was still shaking and getting stronger and stronger.
So I went outside with our volunteer members.
I was thinking "it is not bigger than the one last year, but it is
big.." kind of spacing out...
"Let's evacuate' Someone said. It brought me back to the reality.

We evacuated hastily with the old woman who is living next door.

As soon as driving out of the residential area, it was a heavy traffic
jam. We couldn't move more than 1 hour.

The evacuation counsel for disaster’s announced many times. 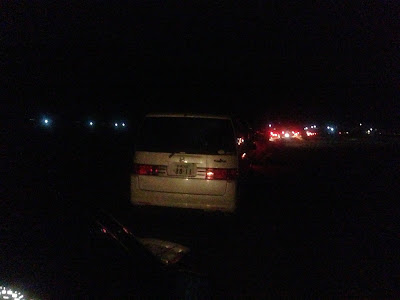 I was staying with my volunteer's bosses and the old woman.
my bosses were checking if everyone was fine and sending mails to
friends or people who new us to let them know we were fine with PC or
phone.

Then old woman told me about her experience last year.
' Last year 3 people shared 1 rice ball.
At that time the happiest thing was what we could eat something. It
didnt matter what we eat. So No matter what i had, it felt very
delicious.

This earthquake probably reminded most of locals of the earthquake and
tsunami last year. I assume it was uneasy few hours or night for them.
Even myself, I was worried what if the tsunami came again.
After 2 hours, the evacuation advisory was lifted.
Them we went back home around 8pm.

It was my first time to "evacuate" from "tsunami"
I realized again it was more difficult to evacuate from tsunami than the earthquake.

Even though there were 10 m high walls along the shore, it would be
hard to evacuate if we didn't have high places and wide roads.
Actually the road we used this time evacuation, it was one way. and we
were caught in a traffic jam.

I live in Watanoha. and there aren't high buildings, only mountains
which stand far away.Last year more than 200 people died in this
district by the great east Japan earthquake.
Either side of R389 (one of the main road), seaside or mountain side,
there was no high buildings.
I think the most important thing is to build evacuation area.
This time locals started evacuating before the evacuation announcement.
Even though we had a heavy traffic jam, locals have high concern about
evacuation.

And I think we should take care of neighbours and know who lives next
door or what their situation is.( alone, cannot walk properly..etc)
If we know, we can help each other when it is needed.
This apples everywhere not only for disaster area or seaside area.

"Everyday (habit)" it is important.

Checked by Naomi: Thank you