67years ago today No.2 (MR.KENJI) Ishinomaki

2012年8月23日木曜日9:30
Yet again, it's Choco from Ishinomaki!
How were the two videos I introduced in the previous blog entry?

Were you able to find the Hollywood star in the first movie?
The answer is "Robin Williams", and the rapper was "ICE-T".

This is the person who made these 2 videos: 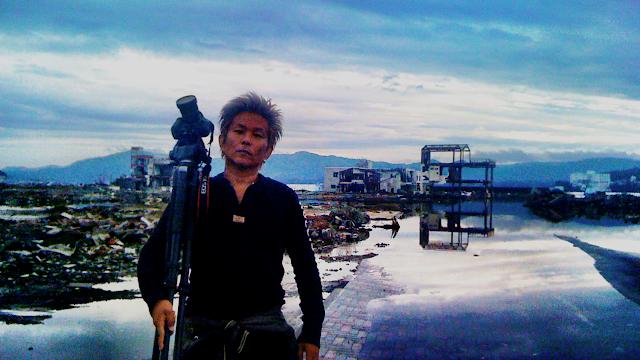 Background
Born in Yokohama, raised in Tokyo. Age....unknown.
Having moved to New York in 1992,
he worked as an assistant to Spike Lee, Terry Richardson and Eiko Ishioka among others.
At the side of these globally famous creators, he learned the art of film-making.
After that he has taken part as a staff member in many films
and advertisements with many famous directors and celebrities.

A film director fit to represent Japan!!
Yukihiko Tsutsumi (Director of "20th Century Boys", "Keizoku", and "Spec") called him
"a real professional among the top directors of the world",
and Hollywood actress Scarlett Johansson (Lost in Translation) gave praise that
"his understanding of timing in the treatment of actors is of a standard
that is hard to find even in Hollywood".

Having worked without bounds in Hollywood, New York, Europe and Japan,
his perception is global and his film-making dynamic!
In the American market,
the balance with which he includes a Japanese flavour is highly commended.
He has worked widely across many formats, making music videos, advertisements and television programmes. More recently,
he has also been rated highly as a director for web content,
3D images and new forms of media.

Filmography
His first film was made as a call for donations for victims of the Tohoku earthquake, extending its fame through the Internet.

His second film, "We Will Always Remember You", was also viewed all around the world, currently recording 2 million hits. It was awarded the Merit Award at the One Show and the Gold Award at the New York Festival.
Currently it is on show at the Cannes Film Festival.

Film History
Mr KENJI told us about the events leading up to the filming.
"It was initially made as a film to show at an event in New York to thank people abroad for their support and aid following the earthquake. As it was supposed to be a film with just one showing, the budget was small and greatly insufficient to fund a trip to Japan to film. However, I had been dissatisfied with the Japanese government for not properly thanking  the other countries for their help, so I was determined to deliver the victims' feelings of gratitude to the world.

Thanks to the producers' great efforts, we somehow managed to organise a visit to Japan."

4 days in Ishinomaki
"I stayed in Ishinomaki for 4 days.
By simply standing there and then driving around for 10 minutes, I was already able to experience the extent of the disaster that I was unable to understand from a distance.
I finally understood the meaning of the words that many volunteers had said:
"Just go there once. Then you'll understand."
The shores of East Japan were strewn with endless destruction,
exposed to the ruthless elements.
Experiencing the mind-numbing gravity of the situation naturally makes you feel that I must do something to help."

said Mr KENJI.
It seems that there is a world of difference between just seeing the videos and actually being there, breathing that air and walking that ground.
I myself was amongst the many who realised this.

People of the Tohoku vs. The camera
"In the 4 days spent there, I travelled around Ishinomaki and Minami-sanriku. The people I met were welcoming, with smiles that have left an impression on me. Even in these hard times, they were facing up to the difficulties of their lives, and many a time I was given courage by their strength of will. I suppose this is a characteristic of the people of the Tohoku area; they were so anxious to offer their hospitality to guests from outside that if we requested something of them, they tried their utmost to fulfill it. At the same time, they were very shy and when I asked them to say something in front of the camera they would try to escape!"

A message of real importance
"In Ishinomaki I stayed with an organisation called INJM. I also met volunteers from different groups through their connections, and I saw that most of these volunteers were young people in their twenties. Before the disaster they were leading their lives just as the young people of their town. They made their own organisations, coordinated with other organisations and became active volunteers.
Of course their youthfulness must mean they are lacking or clumsy in some respects. On top of this, many of the problems created by this disaster are not the sort of thing that the small endeavours of individuals can solve.
Even then, every day these people simply do their work, report to each other and decide on their plans for the next day. Amid the destruction ruled by despair and apathy, their efforts were as dazzling as the small flower that blooms on a wasteland. More than the actual results of their exertions, I believe it is important that they were there and they acted, creating hope with their presence."

To the people of Miyagi
"While we try to solve the problems, they only seem to increase, and we're not sure who we should be listening to. This situation will continue, but I urge you to never give up hope and to keep moving forwards.
The mother who appears with her children at the end of this video is also from Ishinomaki, and when she said to me "Had you ever come to Ishinomaki before the disaster? It was really a wonderful place", she wore an expression of regret that I cannot forget. Her words were filled with a determination saying "We will rebuild our town".
With this disaster, you could say that we have learned the helplessness of civilization in the face of the forces of Nature. However, at the same time, we have learned that people's actions can make a difference, even if it is only small. Like Jamie who set up INJM, the young people coordinating the volunteer effort and the American army who decided to provide emergency relief, these things only happened because these people chose the option to act. However tough it is, however chaotic it is, let us be guided by the fundamental principle 'to tenaciously act' in moving forwards. I wish for an amazing restoration that will be hailed by the world in 20 years as the 'miracle of the phoenix, Japan', and for Ishinomaki to be at the centre of that restoration."

＝＝＝＝＝＝＝＝＝＝＝＝＝＝＝＝＝＝＝＝＝＝＝＝＝＝＝＝
Mr KENJI stayed at our base while he was in Ishinomaki. In the mornings, he'd be gone before we realised and at night, he would be working at his computer. We remember him as being a very busy person.

As he said, I believe that great meaning lies in the decision to act. We cannot change the past, but we can change the future. I am also slowly converting what I felt I wanted to do into actions. I feel it is this process that gradually leads to bigger things.


Our thanks to Mr Kenji, who agreed to be interviewed.